So the French Open is finally here and the promise of two weeks of enthralling clay court action has become a reality.  While the men’s event looks as good as a done deal, the women’s draw looks far more unpredictable and enticing.

Here, we look at some of the favourites, their form going into the tournament and their latest odds.

After making a sensational comeback to the tour, Henin became everyone’s fancy for the French Open – where she reigned supreme for so long before her retirement – especially without injured rival and fellow comeback queen Kim Clijsters in the draw. Despite being seeded 22nd, the Belgian is the clear favourite of the bookmakers and the fans and relishes the Roland Garros atmosphere. 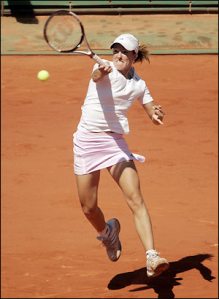 Henin is the clear favourite for the Roland Garros title

Henin certainly has the game to win the tournament, with the slice backhand able to slow the play down when required and her ability to slide gracefully around the court helping her achieve perfect poise and balance. What could prove most interesting could be a final against Serena Williams, who has the mental advantage of having won the last grand slam final against Henin in Australia.

Deserves to be the favourite and it will take quite an effort for anyone to beat the queen of Paris clay.

Serena goes into the tournament in the unusual position of being the 2nd favourite, despite holding the world no.1 position and the no.1 seeding.

However, the French Open has never been a natural home for the powerful American, with just the one tournament win in 2002. Her strength is her main asset and although her game is not ideally suited to the clay, she is simply too strong for most opponents.

Despite never being a crowd favourite, you can expect Serena to bang her way through to the second week without too many problems, but with a likely quarter final against Henin could prove to be the end of her challenge.

In-form Jankovic looked imperious in the first round and has a good clay court game. She has developed the consistency to match her shot-making and could be a good bet for anyone looking outside of the big two, although she has yet to make her mark in any of the grand slams, which is something she desperately needs to remedy soon.

With all of Venus’ success over her career, it is easy to forget that she has never won the Australian Open or the French Open. Her form is good coming in to the tournament and with her 30th birthday less than a month away, she knows there won’t be too many more opportunities to crack this tournament.

With her Madrid conqueror Avarane Rezai a potential opponent in the last 16 and Elena Dementieva likely to be waiting should she get to the quarter, Venus is going to have to beat two of the tour’s most in-form players just to get to the semis. Will take something superhuman for her Paris hoodoo to end. 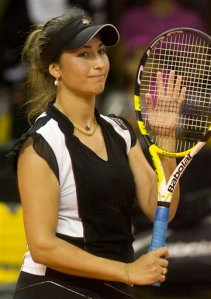 The young French no.2 came of age in Madrid with a sensational straight-sets victory over an in-form Venus Williams and, at 23, she finally seems to be fulfilling her tremendous potential.

With a coach who is keen to emphasise the simplicity of the game, Rezai appears to be flourishing. Her talent has never been in doubt and if she can get past a potential rematch with Venus in the last 16, she’ll have an entire country’s worth of momentum behind her as she guns for her first grand slam. More than a dark horse, especially if seeds begin to fall.

The reigning champion is not among the top tier of favourites this year after some indifferent form, but she knows what it takes to win the title, which gives her a huge advantage over almost every player in the draw.

3rd seed Caroline Wozniacki is the main obstacle in her quarter of the draw, but neither player is likely to better whoever emerges victorious from the Dementieva/Rezai/Venus Williams triangle in the bottom quarter.

Of all the Russians hovering around the top echelons of the game, Dementieva comes into the tournament in arguably the best form of the bunch, but will do well to emerge into the semis from a tough-looking quarter of the draw.

Best of the rest:

Australia’s Sam Stosur has been in impressive form this season but is far too close to Henin in the draw for comfort.

Serbia’s Ana Ivanovic pretty much fell apart after winning at Roland Garros in 2008 and her career has never really recovered. She is playing some good tennis going in to the tournament after linking up with Steffi Graf’s former coach Heinz Gunthardt, but is still only 9-9 for the season. The former world no.1 is still only 22, but mental toughness is the main issue. Ironically her coach’s former pupil had the best ball toss in the women’s game – Ivanovic’s ball toss is still her biggest weakness, especially when the pressure is on her second serve. There is a lot of goodwill out there for the young serb, but without a vastly improved serve she will be heading for an early exit.

World no.3 and no.3 seed Caroline Wozniacki is a bit of an outsider with the bookies at 25/1.  She has yet to hit form on the clay and has never been beyond the 3rd round in the French Open. At 19 and with the experience of the US Open final in her pocket, exciting things undoubtedly lie ahead for the Dane with 7 WTA titles to her name already. This year is not likely to be her year though.

Maria Sharapova is still struggling for consistency after a nightmare spell with injuries. The 23 still needs the French Open title to complete her collection of all 4 grand slams, but in reality the clay court is her least favourite surface and her movement is not good enough to trouble the top players on the red dust.

Henin is the sensible choice, especially with arch-rival Clijsters out injured, but as 22nd seed she will have to do it the hard way and take down a few big names along the route. She will relish the challenge though.

Should she vanish early though, Jankovic is overdue a grand slam win and the heart says a victory for Aravane Rezai would be sensational for the crowd, the sponsors and the sport in general.