The ‘Haymaker’ won a majority decision despite facing a hostile German crowd, dominating former champ Nikolai Valuev, who he previously antagonised by describing as ‘a circus act’.

All bravado vanished as Haye began the fight in speculative fashion, dominating Valuev with a 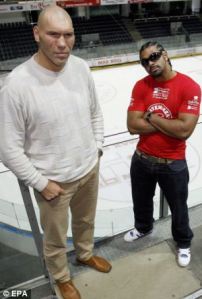 clever performance of movement and jabbing; constantly keeping his massive opponent on the back foot and refusing to give him a steady target.

Haye dominated the early rounds against the 7′ 2″  Russian, who had never been knocked down in his previous 51 fights.  Much of his clever jabbing performance was actually down to a broken hand, which Haye sustained in the 2nd round.  From then on, he looked to out-manoeuvre his massive opponent with a series of jabs and weaves, never leaving his head exposed to the Russian’s potential knockout power.

Valuev looked to utilise his height and weight advantage through the middle rounds, but Haye managed to impress the judges sufficiently through his agression to take a decision 116-112 on two score cards, with the third judge scoring the contest level.

It was a fair reward for Haye who boxed a clever fight, possibly aided by his broken hand as he looked to out-smart his opponent rather than knock him out.  Haye almost became the first man to knock Valuev out, rocking the giant Russian in the closing rounds.

Ultimately, Haye was unable to deliver on his pre-fight promise of being the first man to knock Valuev out in his 51 fights, but it meant little as he took a deserved majority decision on the judges scorecards.

Haye becomes the first British Heavyweight champion since Lennox Lewis in 2003 and now has a mass of opportunities to consider.  He is now in a much stronger position to broker a fight with either Klitschko brother, after recent discussions broke down.

Whatever happens now, Haye can rightfully consider himself a bona-fide world chamion who the world boxing communtity will have to respect.  He has achieved a feat few thought him possible of, and deserves all his plaudits.

What the British boxing public deserve now is a heavyweight champion who can box on live television.  Hopefully the victory of David over Goliath will convince terrestrial broadcasters that boxing is a sport with a future and, more importantly, a potentially huge television audience.  That future is now safely in the hands of WBA Heavyweight Champion David Haye.